Six full months of drinking breast milk only has earned Ethan the right to move on to solid food. On the menu today, I prepared rice cereal mixed with expressed breast milk, stirred to a runny consistency. We put him in his yellow Bumbo seat, got him garbed in a bib, had a hanky ready and proceeded to feed him.The first mouthful was met with a sour look and a “What’s that you are feeding me, Mommy?” expression. 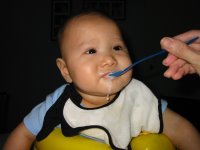 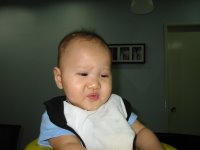 Most of the cereal dribbled out the corner of his mouth though. He then grabbed the feeding spoon and began to play with it. Of course, we were hoping he would feed himself la…. hehehe… no such luck as he only used the spoon to hit the Bumbo seat and tried to chew on it. 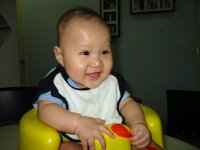 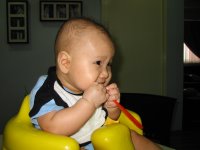 All in all, a successful first attempt and I am not complaining. Six months of exclusive breastfeeding also earned Mommy a “present”: a slice of yummy apple crumble cheese cake 🙂