You are currently browsing the archive for the Sports category.

A few months ago, Emma participated in her school sports day.  She had been eagerly looking forward to it and had also been putting in a lot of practice for the event.

Stretch and Warm Up…

This year, Emma’s class’s sports event was a Pizza Delivery activity.  The kids had to ride a tricycle, pick up 2 corrugated cardboard pizzas and deliver the pizzas to a designated location, thereafter they would ride the tricycle back to the start.

Emma was delighted to receive a medal on the podium… look at that happy SMILE!

Ethan participated in an inter-school football tournament for Under 11s in early November this year.  The tournament saw several schools in Penang and one from KL compete in a half-day affair, which began with a rather wet and rainy morning.

This did not dampen the spirits of all the kids though, and they all had a lot of fun.  It was a good experience and great exposure playing in a team environment, and we are looking forward to more tournaments such as these.

Can you spot Ethan in these photos?

August 3, 2016 in Emma, Entertainment, Growing Up, Milestones, Sports | No comments

Our little Emma took part in her first ever Sports Day a few weeks ago.  It was such a meaningful event for me because I know she had come a long, long way from the time when she had to be all wrapped up in her onesies to prevent her from scratching herself due to her eczema; and now she has improved so much that she can be dressed in regular clothes and even participate in sports day events!

Emma was part of the group of the school’s youngest children: the Playgroup classes; and of course, it was super adorable to watch them go through their events.  Some looked a little blur and some had stage fright, but Emma performed wonderfully….she told me exactly what she had to do and that she had to end her turn with a “high-five” on her friend.

Emma and her classmates had to emulate what the Letterland character Firefighter Fred would do: climb up a “wall”, scramble up a “ladder”, and then “put out a fire” with a water hose.

We really enjoyed the event and don’t you think the kids look exceptionally cute in the firefighter headgear?

After the event, she received her first-ever medal!  Whee!!!

This time, for Sports Day, I also had backup photographers helping me out

Note: We respect your privacy, so if you see a picture of your child in this post and would prefer for me to blot out his/her face, please email me at joyce.cheah (at) gmail.com and I will do the needful.  Thank you.

When we heard that Liverpool would be playing Malaysia as part of their Asia Tour 2011, we wanted to take Ethan to the match, but still, we were not sure if he would want to go.  We told him that it was going to be noisy, very hot, and the match was going to be a whole 2 hours.  He thought for a while and then he decided he wanted to go.

We enlisted the help of Allan Aku, Pei Gee Ah Kim and also Ah Mah, who had travelled all the way from Ipoh to take care of Hannah for a few hours while the three of us went for the match.  We took an LRT from the Sungai Besi station, which was only a station away from the Bukit Jalil station.  It was Ethan’s first time ever on the LRT.

He was having a little cough but not once did he complain that it was hot or crowded.  He asked for a snack before entering the stadium.

He only kept asking when the match was gonna start.  You see, we’d arrive in the stadium about 1 hour and 45 minutes before kickoff..and it was a good thing too, because a little later and we would not have been able to get seats.

We didn’t bring any scarf or banners, but we were approached by a Standard Chartered representative to provide our contact numbers and in return we would get a Liverpool poster.  So that’s what Ethan held during the singing of the Liverpool anthem, You’ll Never Walk Alone.  I also taught him to sing the “Liverpool…..Liverpool….” tune

Ethan taking a catnap 45 minutes before the match started.

Throughout the match (especially during the first half), Ethan kept asking us when the goals would come.  And when they did, he cheered as loudly as all of us.  I’m sure he wasn’t disappointed with the score

Tired though we may be, we had to rush back home to Penang after the match.  Both kids, especially Ethan, were very tired too, for they slept through almost the entire journey.  Thanks to Daddy’s safe driving (not to mention FAST), we arrived home at about 2:00a.m.

Well, if you’re wondering why we had to rush back so soon, there’s a very good reason, and here’s a sneak peek…

Last weekend, we’d asked Ethan to choose where he wanted to go, since Pete had a long holiday weekend (Agong’s birthday).  At first, Ethan was undecided, but then he later announced that he wanted to go to the beach.

I told him that if he wanted to go to the beach, he would have to wake up very early, and he would also be responsible to wake everyone up, so that we could reach the beach early.  The previous weekend, cousin Jonathan (from KL) went to the beach too, but Ethan declined because he said it was TOO HOT.

Well, despite waking up so early, we got ready and arrived at the beach at about 9:45a.m.  That’s considered very early for our standards.  The sun was still warm (not baking hot), and the sea was inviting.  We chose a rather secluded beach that was not too rocky, and that was not too popular with tourists.  Slapped on copious amounts of sunblock on top of the layer I put on them at home and we were all set!

The kids got to play with the Rio beach ball Ethan had won in a magazine contest.

Ethan and Hannah immediately wanted to go and play with the waves.  But as soon as the waves licked their feet, Hannah was screaming, “Carry me, Mommy!” and she wanted to return to our umbrella.  (see that pout?)

Ethan, meanwhile, had a LOT of fun with the waves, showing totally no fear whatsoever.

Hannah preferred to steer clear from the water’s edge, and play with her plastic cup, scooping up the sand and pouring it out.

We definitely need to get more sand-castle building tools for them the next time we visit the beach.

Ethan said, “Daddy and Mommy, thank you for bringing us to the beach today!  I had a LOT of fun!! Please, can we go again?  Please please?”

Of course we can, darling…and hopefully soon!  Can you believe that it was the FIRST time Ethan and Hannah had been to the beach in Penang? 😛

We got a fantastic deal on this set of Liverpool jammies for Ethan and he has been asking to wear it every night.

“Mommy, I want to wear my Liverpool jammies 5 rows in a day because it’s SOOOoooooo comfortable!”

He means “5 days in a row“…hehe…he sometimes mixes up his words when he gets incredibly excited.  Well, garbed in that slammin’ set of jammies, Ethan will certainly never walk alone

Ever since our Ethan boy was born, he has very little hair. In fact in the early weeks, I jokingly referred to his lack of hair as premature baldness or male-pattern baldness. He used to have 2 patches of hair on the sides and the middle portion of his head was bald. Then slowly the hair in the middle portion of his head began to grow to what it is today.However, at the back of his head now, there is still a bald patch with virtually no hair. We call it the Zidane patch, after the great footballer Zinedine Zidane. Does this indicate our boy will follow in the footsteps of Zidane with football glory in his future? 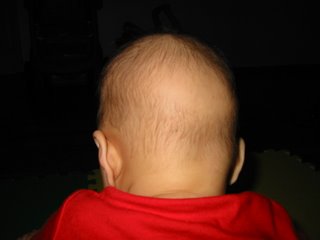 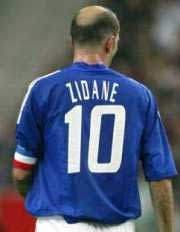 Zidane and his patch

Determined to get Ethan accustomed to the water, we took Ethan for another dip in the pool. The baby pool was rather hot and unshady and conquered by some other kids, so we took him to the shallow end of the adult pool instead. There was no one there at that time, so it was the perfect opportunity for him to discover the water. I first went into the pool and showed him how fun it was, splashing on the water.
Then when I carried him in, he started kicking his feet!…. and smiling! Slowly I began floating him in the water, all the time talking to him reassuringly. Our boy was enjoying himself!
He proves to be a water baby after all… 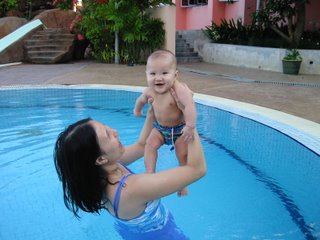 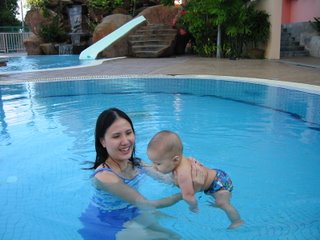 Let’s see if I can do this… 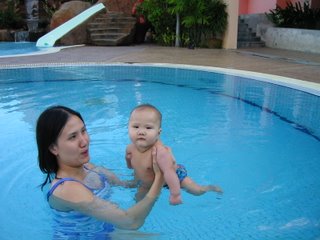 I’m bored now Daddy… can we call it a day? 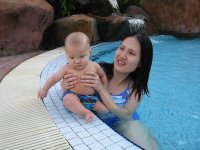 Took Ethan “swimming” today at the baby pool in our apartment. Actually it was an unplanned occasion, as we had planned on taking him only at 6 months. But while shopping yesterday, we got a really huge bargain on the swim diapers and I promptly bought a pair.Eager to try the swim diapers out, we decided to take Ethan for a quick dip dressed in his new “swimming trunks”. He really looked like a big boy in the trunks, if I might say so myself. Anyway, already 5.5 months, so he should be ready for the pool, given the fact that he kicks and squeals happily during his bath time. 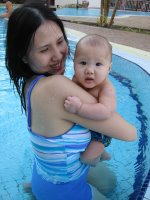 Upon reaching the water’s edge, I went into the pool first and then carried Ethan and sat him on the edge of the wall of the pool. He looked slightly confused – he must be thinking “How did my bathtub get so large?”. I then sat him on my knees, and slowly got him accustomed to the water. But when I tried to make him float on his front, he started making “manja” sounds…never mind, will try again another day.