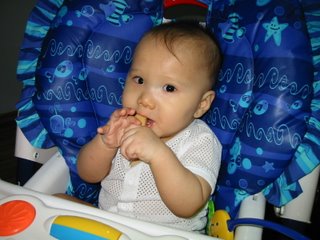 Today I introduced teething rusks to Ethan. Since rusks contain wheat, we only waited till he was 8 months + (which is now) to introduce this complementary food. Upon the recommendation of a friend, I bought Heinz teething rusks, which are supposedly less brittle.Our boy took a liking to the longish rusks immediately! He sucked and nibbled on it, like his life depended on it! And when I took it away from him, he bawled like a …. well…. a baby! I tried a chip of it after that: it is really quite hard, and had no taste whatsoever.

So today while we had our dim sum brunch, we gave him another rusk to occupy himself while we ate. Normally, Ethan, being an active babe (and a demanding one at that too!), would not be able to sit still throughout our entire meal at a restaurant. But today, he had a teething RUSK… so while he busied himself with it, we had a nice non-carrying-baby brunch. Hallelujah to the rusk – definitely a great invention!