We had a wedding to attend in KL so it was the perfect opportunity for us to take Ethan on his first trip. Plus, here was also a good excuse to frequent our favorite store Ikea. It was my first trip out of Penang since I had Ethan, and as we cruised across the Penang bridge, I had poignant memories of heading the other direction towards Penang the first day of Chinese New Year this year as I had mild labor pains then.Ethan fell asleep not too long after we passed the Juru intersection and slept for like 30 minutes at the most. He became fidgety upon waking so we decided to make a quick pit-stop at the Sungai Perak rest area, where I breastfed him in the hopes of appeasing him a little. Heh.

Well, we arrived in Ipoh a short while later, where we had Mom’s delicious lum mee. Yummy…It was nothing short of excellent! Ethan had a little of his cereal with pear. Grandma and Grandpa from Ipoh were bowled over by Ethan’s antics and I am sure they had a field day feeding him. Before leaving Ipoh, I fed Ethan again and then we were on our way.

He put up a fuss while we were headed for the Ipoh(S) exit (missing AKong and AMa??) but miraculously, he fell right asleep when we crossed the intersection. Even more miraculous was that our boy slept for 2 hours straight, right till we reached KL and checked into the Royale Bintang Damansara Hotel! 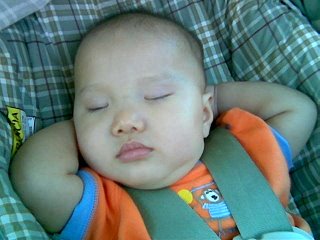 We rested (yeah right!) in the hotel for a couple of hours and then decided to go for stroll in The Curve. Ethan had his dinner in the Baby Care Room in The Curve, which was SO comfy that he fell asleep then and there after his feed! 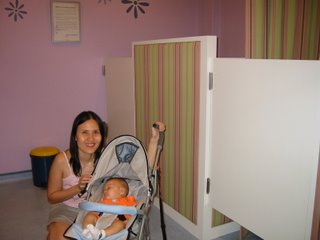 Went to check out Borders at The Curve, where Ethan had a good time smiling at everyone there. When his Aunty Pauline showed up with a miniature Barney, Ethan started giggling uncontrollably! Hehee…. At the time, we were really hungry and ended having fabulous Italian food at Italianees.

Our boy was the center of attention there. Couldn’t stay still and kept requesting to be carried around. Baby chair didn’t help either, cos he would try to escape from it! 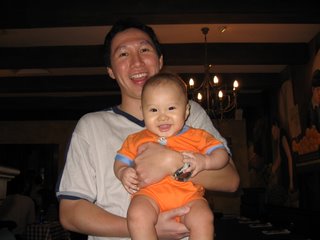 Safe and secure in Daddy’s arms 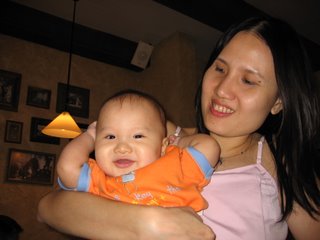 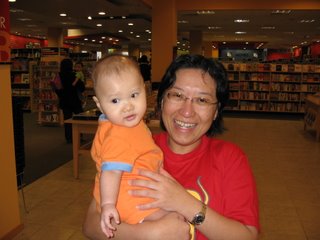 After dinner, we went to check out the organic store at Ikano where I bought some red bario rice, millet, quinoa and buckwheat in preparation for Ethan’s porridge in a few weeks’ time. We then headed back to the hotel, very full but also very tired. Hope we’ll be able to keep up with Ethan the next day! 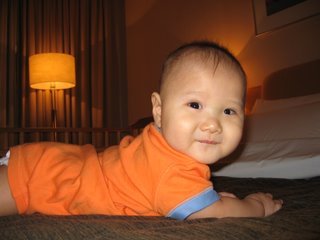