You are currently browsing the daily archive for November 23, 2006.

Last night my maternal instincts told me that Ethan was about to catch the flu. We gave him a quick bath anyways, and prepared him for bed. After dressing him up in his pjs, I breastfed him for his night cap. Normally he would take only 15 minutes tops and then he would be out like a light, but yesterday night, it took him 30 minutes to feed. He was drinking a LOT of milk! That was a sign that he was catching a virus.

He then awoke at sometime past midnight and I nursed him, as usual. His body felt slightly warm, so I prayed that it would return to normal after a while. However, after feeding, he refused to go back to bed in his cot, so I had to cuddle him as I sat slightly upright in bed, propped up by pillows. During the many times when he awoke during the night, I breastfed him and let him sleep, either in my arms or beside me on the bed. His body was still warmer than normal in the morning at 7:00a.m. when he woke up but when we took his temperature, it was only 36.1 degrees Celsius – probably cos he was wriggling all the while, and it was hard to keep the thermometer in his underarms. We then decided to take him to see the doc, just as a precaution.

Upon reaching the hospital, I felt that his body temperature had gone back to normal somewhat. To be completely honest, Ethan was looking very much like his normal self and not at all sick (the wonders of being a breastfed baby never cease to amaze me). The nurse at the registration desk asked if baby had fever, and I told her only this morning, not sure about now (for the record, all this while, Ethan was flashing the nurse a big wide grin). To be on the safe side, the nurse directed us to the Accident and Emergency department to have his temperature taken. Reading: 37.3 degrees.

Up we went to the doc’s clinic – after like an hour of waiting, we were finally ushered in. The doc said it was the beginning of a flu virus, but since he seemed happy, there was nothing to worry about. We were given Paracetamol but it was only to be administered if his temperature was 38 degrees and above.

We took him home, gave him a quick bath, fed him and he slept for most of the afternoon. I then prepared his dinner for him, which is what I like to call comfort food. When I was a little girl, I remember my Mom cooking comforting soupy stuff for me when I was not well. My version of comfort food for Ethan? Mee Suah with ground oats topped with lettuce and corn with that extra bit of yummy chicken. It was gobbled down with glee!

So who do you think won the battle between Ethan and the Flu Bug? You be the judge… 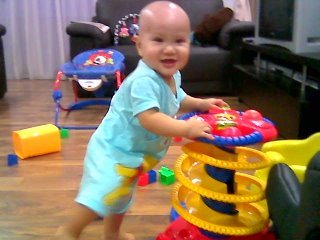 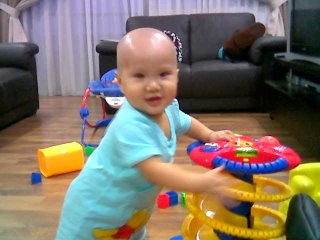